From my first semester at Stanford to the last one and beyond, I was working on a CubeSat nanosatellite nicknamed Discovery, for the European QB50 project. I had multiple roles in this project. At first, I was involved in setting up the ground station, from RF, through protocol implementation to ground software configuration. Then, I worked on the concept of operations and pipeline for instrument settings. In 2015, I was awarded a position of the teaching assistant for the class. Thanks to this assignment, I took a larger role in team leadership and project management. Finally, I took the role of lead flight software developer, writing C code for the Salvo RTOS platform on a PIC24 processor. As a leader of the flight software team, I was responsible for implementing the CCSDS packet communication protocol, interface with the instrument, all subsystems and custom sensors, as well as configuring the mission control system and database. 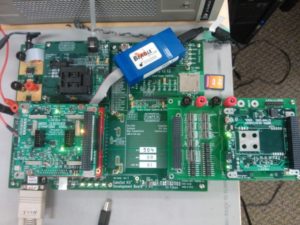