My research efforts at Stanford culminated in a mission proposal for a Miniaturized Distributed Occulter Telescope (mDOT). The proposed mDOT mission consisted of a microsatellite carrying a 1 meter radius petal shaped occulter in formation flight with a 6U CubeSat carrying a 10 cm diameter aperture telescope designed to image extrasolar dust and exoplanets at short visible and ultraviolet wavelengths. Following a systems analysis based on the definition of mission requirements and a survey of CubeSat capabilities, we proposed a concept of the telescope spacecraft which would provide 80 days of operation with 50 W solar cells and 31 m/s of cold gas delta-v. The objective of the proposed mission was to directly image the vicinity of nearby stars and by doing so, prove that miniaturized space systems are capable of executing complex missions. I wrote an academic paper and presented it at the IEEE Aerospace conference in 2016. The conference proceedings paper can be downloaded here. 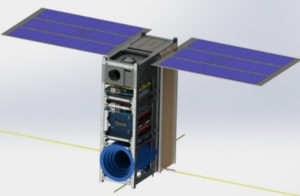